More castles designated as National Treasures and the sister castle in Japan are featured on this site.

Japanese Castles Designated as National Treasures other than Himeji Castle

Matsumoto Castle is the symbol of Matsumoto City in Nagano Prefecture, “the City of the Japan Alps and the Castle”.
This castle was constructed by the Ishikawa clan, a retainer of the Matsumoto Domain, from 1593(Bunroku 2nd yr)to 1594(Bunroku 3rd yr).
The main keep of this castle is the oldest of the existing five-layered keeps. 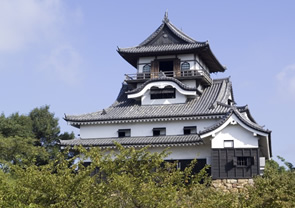 Inuyama City is situated on the south bank of the Kiso River in Aichi Prefecture.
In 1573(Temmon 6th yr), Inuyama Castle was constructed by Oda Yojiro Nobuyasu who was an uncle of Oda Nobunaga(the powerful Japanese feudal lord in the 16th century).
This castle is renowned as the oldest castle in Japan. 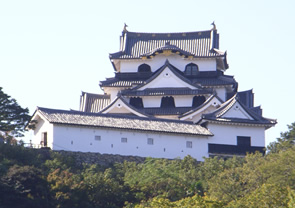 Hikone Castle is located on the east shore of Lake Biwa in Shiga Prefecture. In 1622(Genna 8th yr), Hikone Castle was completed by Ii Naotsugu and Naotaka, the 2nd lord of the Hikone Domain, after an approximately 20-year construction period.
This was the main castle of the Ii clan which consisted of 350,000 Koku*.
The Ii clan is famous for the 13th lord, Ii Naosuke.

*Koku:(To express the scale of a domain, the measurement of “Koku” was used.
1 Koku equals about 150 kg of rice which was regarded as enough rice to feed one person for a year.
Therefore, a domain of 350,000 Koku was large enough to produce enough rice to feed 350,000 people.
The Hikone Domain can be said to have been a rather big domain in those days.)

The Sister Castle of Himeji Castle 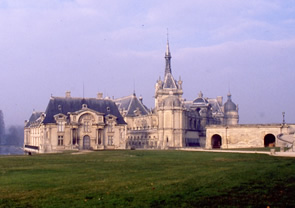 This castle is said to be one of the most beautiful castles in France.
Located 40 km north of Paris, the castle is a representative construction of magnificent Renaissance architecture.
Himeji Castle established a sister-castle relationship with this castle in 1989.